Lucerne, December 30th 2009  2009 was the year of the 25th anniversary of breaking innovations in personal computing. Early 1984 two milestones were unfolded on both sides of the Atlantic Ocean. Europe was first with the launch of the 32-bit multitasking/multiwindowing Sinclair QL. 12 days later America saw the launch of the 32-bit GUI/multiwindowing Apple Macintosh. They both entered the field to compete with IBM's PC.

While the Mac did it in the long run and is a mainstream product in the present and future, the QL went into dust. Before leaving the field, the QL inspired many experts and influenced today's products in one way or another. Most prominent example is Linux, where its creator Linus Torvalds was a QL hacker back in the 80s. To learn more about all that please follow the full 25th anniversary story.

On July 1st 2009 it was announced here that the 25th anniversary of the QL & Mac will be celebrated with an international 2 days show in autumn 2009. The event was promoted in mailings-lists, news-groups, specialist magazines, YouTube and even on the radio.


Click on picture above to watch the teaser videos promoting the "QL & Mac are 25" show (offsite-link).

As one of the many anniversary activities the "QL & Mac are 25" international event took place on Oct 31st/Nov 1st 2009 in the Verkehrshaus, Lucerne, Switzerland.

The Verkehrshaus in Lucerne is the Swiss Transport Museum (offsite-link).

Some 50 people attended the show. Visitors came from the UK, Austria, Germany, Holland and Switzerland. 20 people joined the 25th anniversary dinner which took place in Lucernes Bistro du Théâtre on Saturday eve. Pictures of both preparation and setup are accessible here (set 1). Photos of the two days event can be found here (set 2).


Click on picture above to watch the highlights of the "QL & Mac are 25" show (offsite-link).

In the conference room a total of 8 sessions and talks covering "QL & Mac early days", "innovation & design then and now", "current Mac OS X (Mac/iPhone), Windows, AMIGA and QL developments", ... and in the welcome session introductory keynotes by "VIP" were held! Photos of the sessions are accessible here (set 2). 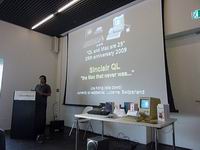 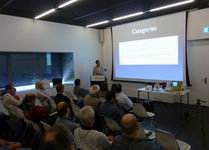 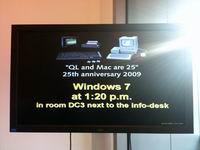 All sessions have been filmed with a Panasonic LUMIX DMC-TZ7 camera. The raw video footage needed some brush up (both audio and video noise reduction, audio volume increase) and a final cut. This took much more human and processing time than expected. All session videos have now been uploaded to YouTube for public audience. Enjoy more than 5 hours of video footage!


Click on picture above to watch all videos of the "QL & Mac are 25" show (offsite-link).


You are kindly invited to download the presentations in both Microsoft PowerPoint and Adobe Acrobat formats. In addition you can watch related videos on YouTube. Follow the links in the table below.

In the conference, software workshop & exhibition rooms there were 16 retro systems (microcomputer milestones from the 80s, not only QL & Mac) on display. 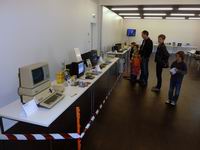 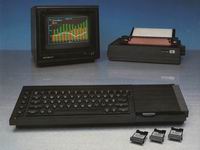 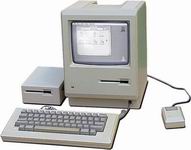 The systems are listed in the table below. Once again photos of the exhibition are accessible here (set 2).


Also on display was the huge PowerPoint presentation "History of the QL" by Dilwyn and Iwan Jones (74 slides, uncompressed size 140MB). Download it as

or even watch it converted to a video:

Between the sessions people either visited the museum or enjoyed QL tinkering. Again photos are accessible here (set 2).


Click on picture above to watch videos of some of software played with in the software workshops of the "QL & Mac are 25" show (offsite-link).


The software used in the workshops is not yet available for download.

At the show two QL projects to be completed in 2010 were presented and discussed.